Lean is the concept of efficient manufacturing/operations that grew out of the Toyota Production System in the middle of the 20th century. It is based on the philosophy of defining value from the customer’s viewpoint, and continually improving the way in which value is delivered, by eliminating every use of resources that is wasteful, or that does not contribute to the value goal. Lean is centered on preserving value with less work; with the ultimate goal of providing perfect value to the customer through a perfect value creation process that has zero waste. This is done by empowering every individual worker to achieve his or her full potential, and so to make the greatest possible contribution.

The goal of empowerment is based on the idea of showing respect for people. Respect for people extends beyond just the end customer and can include the workers, suppliers, and society. For the end customer, Lean strives to maximize value delivery while minimizing waste in the process. Lean aims to maximize human potential by empowering workers to continuously improve their work. Lean leaders facilitate this goal through problem-solving training. They help workers grow professionally and personally, allowing them to take pride in their work.

At the heart of the Lean philosophy is the concept of “kaizen” or continuous improvement. The goal of continuous improvement is to eliminate all waste in the value delivery process. To do this, Lean leaders must go where value is created – commonly known as the gemba. At gemba, they often spend their time coaching and developing their people. They encourage workers to actively identify problems and look for opportunities for improvement.

In order to understand the history of Lean, we must go back to the start of modern manufacturing. Henry Ford was the first to truly integrate a production system called ‘mass-production’, which manufactures large quantities of standardized products. Ford created what he called a flow production, which involves continuous movement of elements through the production process. Ford used mass production to fabricate and assemble the components of his vehicles within a few minutes rather than hours or days. Unlike craft production, the mass production system delivered perfectly fitted components that are interchangeable. This process was very successful and allowed the Ford Motor Company to produce over 15 million Model T cars between 1908 and 1927. During World War II, the US military adopted Ford’s mass production system.

In 1926, Sakichi Toyoda founded the Toyoda Automatic Loom Works. Several years later, the company changed its name to Toyota when it began producing automobiles. In 1950, Eiji Toyoda, the nephew of Sakichi, participated in a three-month visit to the Rouge plant of Ford in Dearborn, Michigan. At the time, the Dearborn facility was Ford’s most complex and largest manufacturing facility. It produced nearly 8000 cars per day while Toyota only produced 2500 cars each year.

After studying Ford’s production system, Eiji Toyoda understood that the mass production system employed by Ford cannot be used by Toyota. The Japanese market was too small and diverse for mass production. The customer’s requirements ranged from compact cars to the most luxurious vehicles. Ford’s mass-production system focused on the amount of production instead of the customer’s voice. Toyota collaborated with Taiichi Ohno to develop a new means of production. They concluded that through right-sizing machines for the actual required volume and introducing self-monitoring machines, they can make products faster, lower in cost, higher in quality, and most importantly higher in variety! Ohno faced the challenge of trading off between productivity and quality. His experiments led to developing several novel ideas that became known as the ‘Toyota Production System’.

The Toyota Production System (TPS) was established based on two concepts: The first is called "Jidoka" (can loosely be translated as "automation with a human touch") which means that when a problem occurs, the equipment stops immediately, preventing defective products from being produced. The second is the concept of "Just-in-Time," in which each process produces only what is needed by the next process in a continuous flow.

With Jidoka, the equipment stops when a problem arises. This allows a single worker to visually monitor and efficiently control many machines. As problems arose, the workers must solve them right away otherwise the whole production line stops. This brings problems to the surface and promotes identifying and resolving problems at their root causes.

TThe idea behind “Just-in-Time” is simple - make only “what is needed, when it is needed, and in the amount needed”. Using Just-in-Time, Toyota is able to produce high quality products efficiently through the elimination of waste. Based on the basic philosophies of Jidoka and Just-in-Time, the TPS can efficiently and quickly produce products of sound quality, one at a time, that fully satisfy customer requirements.

The Principles of Lean

The principles of Lean were first introduced in the book The Machine That Changed the World (1991) by James P. Womack, Daniel T. Jones and Daniel Roos. The authors studied several manufacturing systems and wrote the book based on their observations at Toyota. The Lean Enterprise Institute summarized these principles to the following: 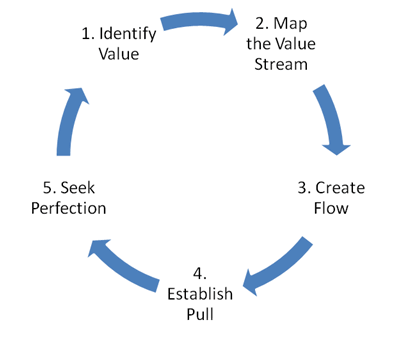 Womack and Jones recommend that managers and executives embarked on lean transformations think about three things:

It is important to align the purpose, process, and people when developing a Lean organization. In a Lean organization, problems are seen as opportunities for meaningful learning rather than errors to be swept under the rug. Managers act as coaches and help others get comfortable with identifying problems and practice continuous improvement on a daily basis. Lean leaders also create an environment that is engaging and conducive to learning. They are hands-on and work with their team on the factory floor to truly understand problems.

Lean was previously seen as a collection of tools and techniques, but it is now widely recognized as a fundamental business philosophy. According to Diekmann, “Lean cannot be reduced to a set of rules or tools. It must be approached as a system of thinking and behavior that is shared throughout the value stream”. Lean thinking is no longer limited to the manufacturing industry. It has been modified and applied to several other industries, such as the construction industry, healthcare, software, and many more. It has been shown that organizations that consistently practice Lean are more innovative and competitive, which in turn allows them to be more profitable and sustainable.

Use The Lean Way to enable teams of all types and across all levels of your organization to apply Lean principles to their work. Get started with a free 14 day trial.

Nawras Skhmot, is a Norwegian civil engineer and entrepreneur with an educational background from The Norwegian University of Science and Technology (NTNU) and UC Berkeley. He is currently working on applying Lean Construction in the Norwegian construction industry, in addition to be involved in several startups that aims to develop softwares and applications based on lean thinking.

The 8 Wastes of Lean

What is Muda, Mura, and Muri?

6 Tips to Starting and Sustaining Your Continuous Improvement Efforts